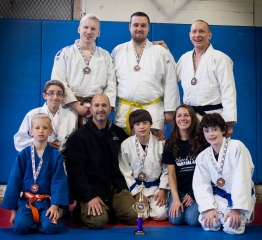 Checkmate had 7 competitors on Saturday, May 15th for the NH State Judo Tournament. Including 3rd place Team trophy, the following awards were earned. Pat Cassidy took Silver with a nice choke submission, Sean Carmack claimed Silver as well with a nice submission by choke. Matt Lawton took Bronze with his thunderous throws. For the youth divisions: Chris S nicely captured Gold by holding his own amongst players well out of his weight class, Marko N. Took silver with a nice quick Ippon, Grayson took Bronze against some tough competition, and Daniel E. Took Bronze with the courage to step onto the mat for his first tournament.
It takes great courage to go out there and face unknown competitors. I’m proud of each and every one of you! –Sensei Leigh